Born on Sept. 23, 1795, on a farm in Corinth, Vermont., to a mixed-race couple. His mother, Mary’s race, is not certain. In national census documents and local records, Mary is categorized as “colored” people or free blacks. However, she was known to be light-skinned. His father, Ichabod was black or mulatto and born in Boston in 1765. Some believe he may have been mulatto due to his last name.

Ichabod and Mary were free but It is unknown if they were born free; they were likely descendants of African slaves and English ancestors. Ichabod was a Revolutionary War veteran. His parents were both listed in the Corinth town history as “the first negroes to settle in Corinth where they bought the property. Their children were evidently all light enough skinned to pass for white. Whatever Alexander Twilight’s precise racial background he left behind no records mentioning his African-American ancestry

According to the Orleans County Museum website, it appears that Twilight labored for a neighboring farmer in Corinth, around 1803, when he was eight years old. “There is no proof that it was an indenture agreement,” the website stated. He then learned reading, writing, and math skills while performing various farming duties for the next twelve years.

In 1826, he married Mercy Ladd Merrill in which they had no children.

In 1855, Twilight was able to save enough money to enroll in Randolph’s Orange County Grammar School at the age of twenty. He completed not only the secondary school courses but also the first two years of a college-level curriculum all within six years. Following his graduation from Randolph, he was accepted at Middlebury College. However, it seems his admission to Middlebury was a mistake.

The college didn’t know he was black when he applied. After he graduated, another, man Andrew Harris, another black American, applied to Middlebury. This time the college didn’t make a similar “mistake.” It rejected Harris because of his race due to school policy. However, Harris instead attended and graduated from the University of Vermont. Alexander Twilight entering as a junior in August of 1821 and graduated with a bachelor’s degree in 1823. This fact was not made known until Amherst College claimed to have awarded its first Black American bachelor’s degree to Edward Jones in 1826.

In 1829 Twilight became principal of the Orleans County Grammar School and then. He also taught for four years in Peru, N.Y., at the same time he studied for the Congressional Ministry. He occasionally led worship services and delivered sermons.

While continuing to teach, the Champlain Presbytery of Plattsburgh licensed him to preach. Twilight studied theology, the church, and the ministry. He occasionally led worship services and preached. There he designed and built Athenian Hall, the first granite public building in the state.

In 1836 he became pastor of Brownington’s Congregational church and principal of the Orleans County Grammar School. That same year he was elected to the Vermont General Assembly and became the first African-American to serve in a state legislature in the United States. Eleven years later, Twilight was embroiled in a contentious disagreement with the county board administrators, and he moved to Quebec, Canada, for five years. 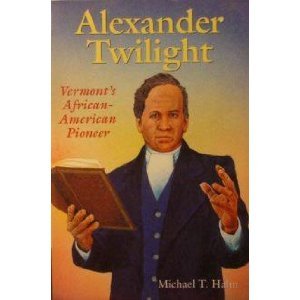 The 1619 Project and the 1776 Commission Curriculum

Tellers Untold is a media platform created to bridge the gap and redefine history by featuring stories of those typically overlooked, underappreciated, and forgotten. We’re out to rewrite history with the inclusion of proper context